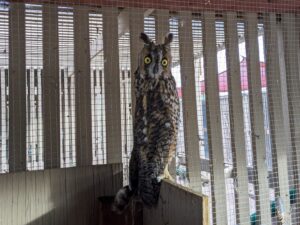 Grayson was found to have a fracture to his left wing resulting in a dislocated elbow.  He was probably struck by a car.  Since surgery was not an option, the elbow was placed in the correct position and bandaged.  Once the injury mended, Grayson was unable to extend his wing fully, limiting both his flight ability and his release.  He was transferred to Liberty’s education team.

Description: The long eared owl is distributed throughout the northern hemisphere. In North America, they breed as far north as the Northwest Territories through southern Canada and across the United States as far south as northern Baja California, southern Arizona, and New Mexico, east to Pennsylvania, New York, and northern New England.

Life span: Captive long eared owls have been known to live over 10 years.

Babies/Nests: Long eared owls apparently do no nest-building themselves. Instead, they usually appropriate stick nests built in trees by other bird species.  Less often, they raise their young in cavities in trees or cliffs, in abandoned squirrel nests, or on the ground. In Arizona, these owls sometimes nest in crooks of saguaro cactus. The female lays between 2 and 10 eggs in a clutch. Incubation is usually 26- 28 days. Fledglings begin making short flights at about 35 days old and become independent at 10 to 11 weeks old.