When a hunter shoots a deer, his bullet may fragment upon impact, sending slivers of lead into the surrounding tissue. This is an unfortunate side effect of what is otherwise a very desired occurrence: lead expands upon meeting resistance, and the expansion of the bullet as it travels through flesh results in a larger and more effective wound. These wounds are more likely to be fatal, rather than leaving an animal with a crippling, but non-deadly injury. The downside is that bullet fragments can easily get embedded in a deer’s organs, the parts of the deer most commonly discarded by a hunter after dressing his kill in the field. Many animals, including birds of prey, routinely scavenge such gut piles, and a scavenging raptor, be it a small hawk or a bald eagle, is swallowing the very worst kind of death sentence if even a single bite has one of those fragments in it.

Think about recent controversies regarding children who have gotten lead poisoning from lead-painted toys. Children are especially vulnerable to lead exposure because of their relatively small size. Now imagine a bald eagle that may weigh a dozen pounds or a red-tailed hawk that might weigh only two. If so much as a sliver of lead makes it into a raptor’s stomach, it begins to leech into its system, pulling that bird into a toxic morass, making it sick and lethargic, unable to hunt, and thus unable to feed itself. Imagine a life where every single meal you eat depends solely upon your physical perfection to obtain it. Now imagine feeling a constant sickness, a fatigue that comes out of nowhere and only gets worse. And it only has to have a small effect, enough to make you miss that first meal. Now you feel weak and hungry. Without nutrients, your body is even less able to fight back against the poison inside of you; lead seeps into your blood, permeating every part of you, making it harder and harder to even hold your wings aloft, let alone hunt, let alone kill. Your inner organs begin to weaken; you’re losing weight; you’re beginning to starve. You’re nature’s perfect killing machine, but as hard as you try, you can’t catch anything. You’re an animal, a predator, driving by instinct. Instinct tells you to survive. The lead in your belly, the lead in your bloodstream, is like an invisible hand, holding you down while you waste away.

What happens to you?  Without treatment, you’re dead.  A potent enough dose of lead can be more immediately fatal, though a small amount is just as deadly, only more prolonged. A heart attack can result from either, especially as your body gets ever weaker. The alternative is to struggle on until starvation claims you or your weakness serves you up as a meal for something else. Liberty Wildlife can and does treat birds with lead poisoning but successful treatment depends upon finding victims early. Even then, there’s no guarantee that the damage can be undone. 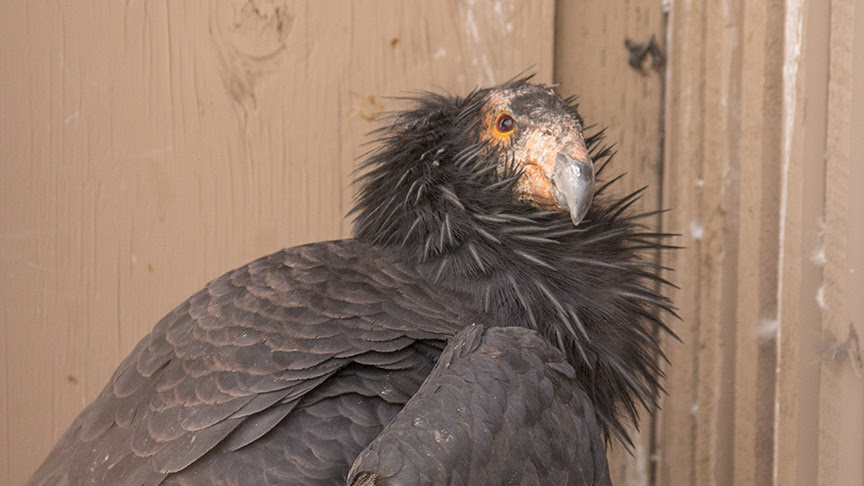 California condors, who stand as the largest birds in North America, are particularly vulnerable to lead poisoning. In fact, a 2009 document distributed by the United States Geological Survey cited lead poisoning, via ingested ammunition fragments, as being the primary obstacle keeping the critically endangered condors from making a recovery. The fact that they are dedicated scavengers makes them especially prone to finding lead-infused gut piles or feeding from bullet-killed deer that were never claimed by their hunters. While a condor’s size gives it some defense against lead’s innate toxicity, it nonetheless suffers a fate that may be even worse than the one described. Liberty Wildlife, in the past, has played host to a number of California condors brought to us with lead poisoning. Lead interferes with their crops, the intermediary sac where swallowed food goes before being moved to the stomach. Their crops cease to function, they can eat all they want, but they can’t make the transition from crop to stomach, and needed digestion.  Their bodies tell them they need to eat, hunger gnaws at them. Instinct implores them. But it doesn’t matter how frantically they gorge themselves, a full crop still means an empty belly. And an empty belly means one of the worst kinds of death.

Is removing lead bullets the answer? Yes, in the same way that getting rid of gasoline-burning automobiles would drastically reduce the world’s pollution problem. It takes time for an industry that has spent centuries working around lead to make a wholesale switch to new materials. Obvious answers are seldom easy ones. In the meantime, raising awareness and sharing knowledge are out best methods to keep more birds from dying. We need to remember that the bullets killing these birds weren’t meant for them. Hunters and rehabbers aren’t on opposite sides. We both care for the environment, and we both want to protect it.

This is the second in a three-article series on the effects of lead poisoning in birds of prey. These are the problems. Part one looked at the difficulties facing the ammunition industry in making the switch to something as effective as lead, but safer. Part three will look at the solutions we can all enact in the meantime to save these birds and preserve the wild world we all love.

The Whitewater Draw Wildlife Refuge is run by Arizona Game and Fish, and they estimation more than 25,000 Sandhill cranes are currently wintering over at the area.  The cranes congregate near the marshy shoreline, a sprawling crowd of 3-foot-tall birds, each preserving its own bit of personal space.  Beyond the cranes and the marsh stretch miles of grassland in a broad valley edged with distant blue mountains. 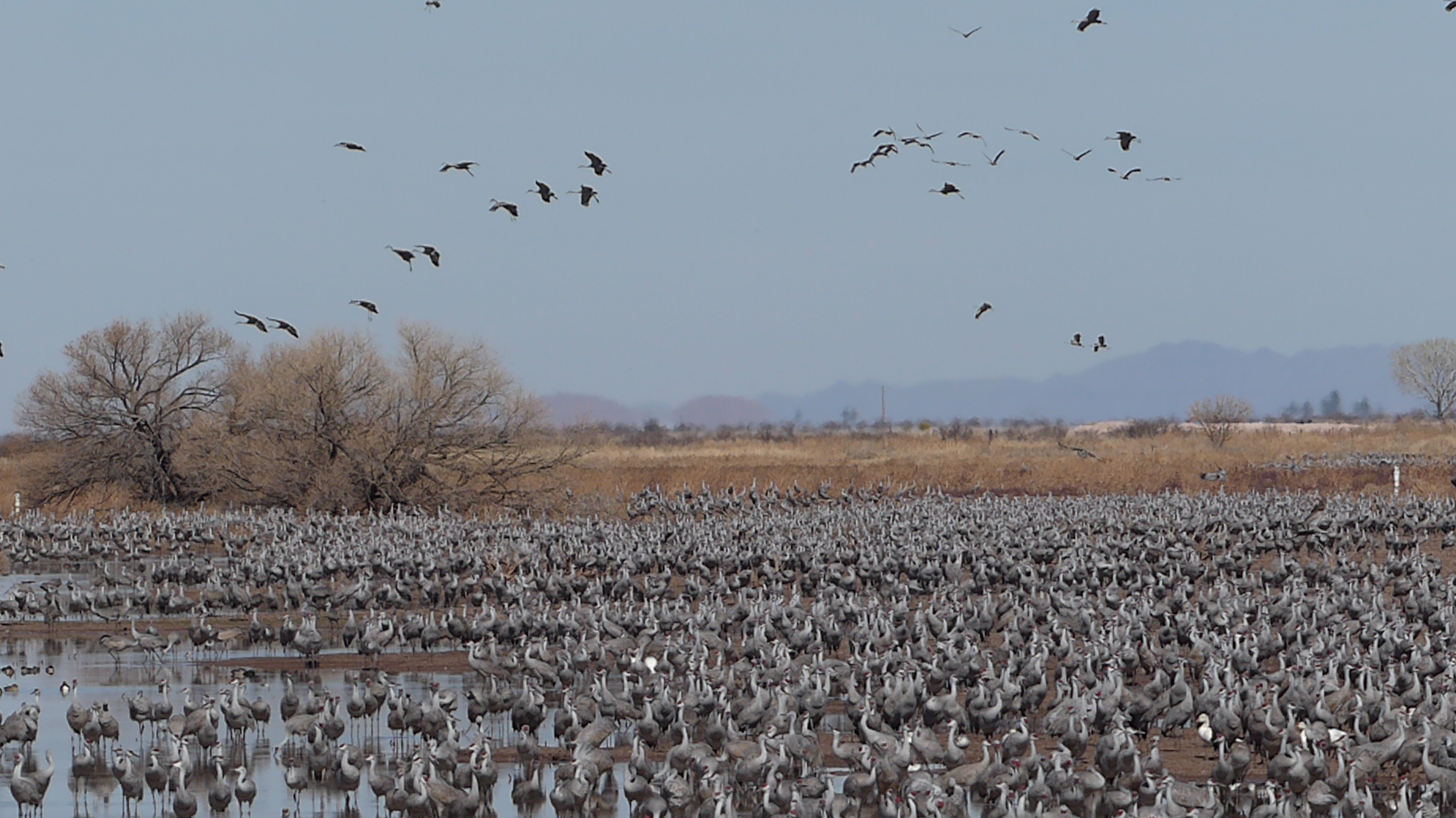 The cranes spread their massive wings and rise up from their roosting area every morning at daybreak, flying to fallow agriculture fields.  They probe the rubble with stout bills, gleaning leftover corn, as well as insects and any sprouts of greenery. After a morning of feeding, the cranes fly back to the marsh. 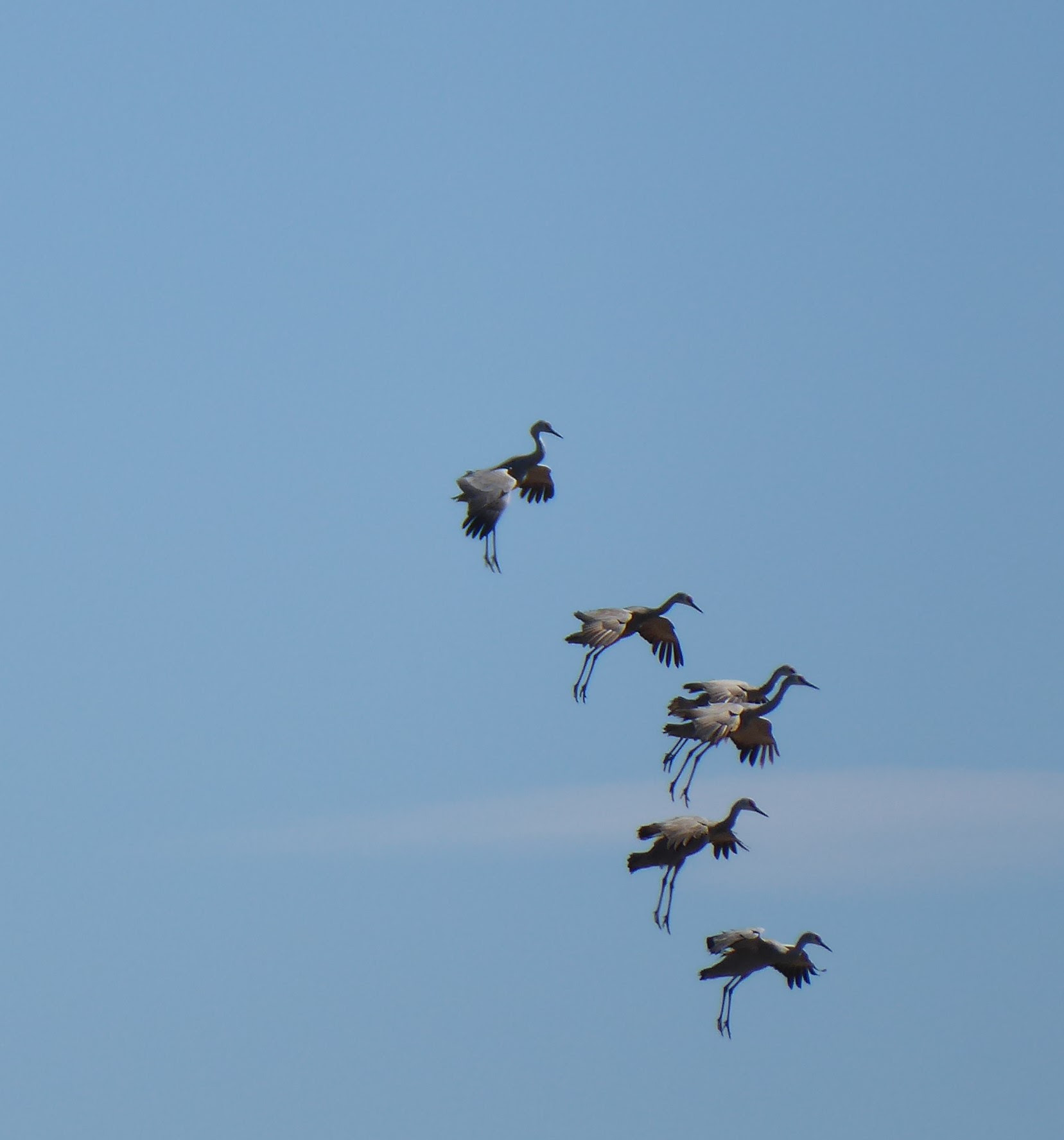 I arrived about noon, and by then thousands of Sandhill cranes were already on the ground, some wading in the water, some standing along the banks.  High overhead, incoming cranes appeared as dark specks in the endless blue, a scattering like pepper corns.  Gradually small groups or pairs dropped lower, circling overhead, honing in on where they would land, calling out to announce their arrival.  Wings outspread they spiraled ever more tightly downward until finally their long legs reached to touch land.

There are six different migratory populations of Sandhill cranes on the continent.  These gathering in Arizona are likely from a couple of different populations.  The Mid-Continent population has breeding grounds in western and central Canada, western Alaska and northeastern Siberia.  These cranes winter in northern Texas as well as central and northern Mexico, and southeast Arizona.  A Rocky Mountain population also contributes to Arizona’s winter residents.

In optimal situations, tail winds and thermals boost the birds on their journeys, and they cover up to 150 miles per day.  They fly 50 miles an hour in good conditions, but in some cases must labor along at only 15 miles per hour.

Sandhill crane pairs mate for life, and the youngsters often stay on with the family group for a year or two.  Breeding does not start until cranes are two to eight years old.  The young hatch covered in down and soon leave the nest.  By early winter they appear adult-like, lacking only the red crown patch.
Sandhill cranes communicate via an extensive language of trumpets, bugles, rattles, honks, moans, purrs and hisses combined with posturing that includes bows, feather ruffled bows, stretches, stabs and kicks.  The Unison Call is a duet sung by courting males and females, and accompanies elegant dance moves – leaps, head pumps and tosses of vegetation.  Guard Calls used with Tall Alert Posture defends nesting territory or warns of predators. Rattle Calls allow individuals to find each other in migration.  Chicks make do with trills and peeps. 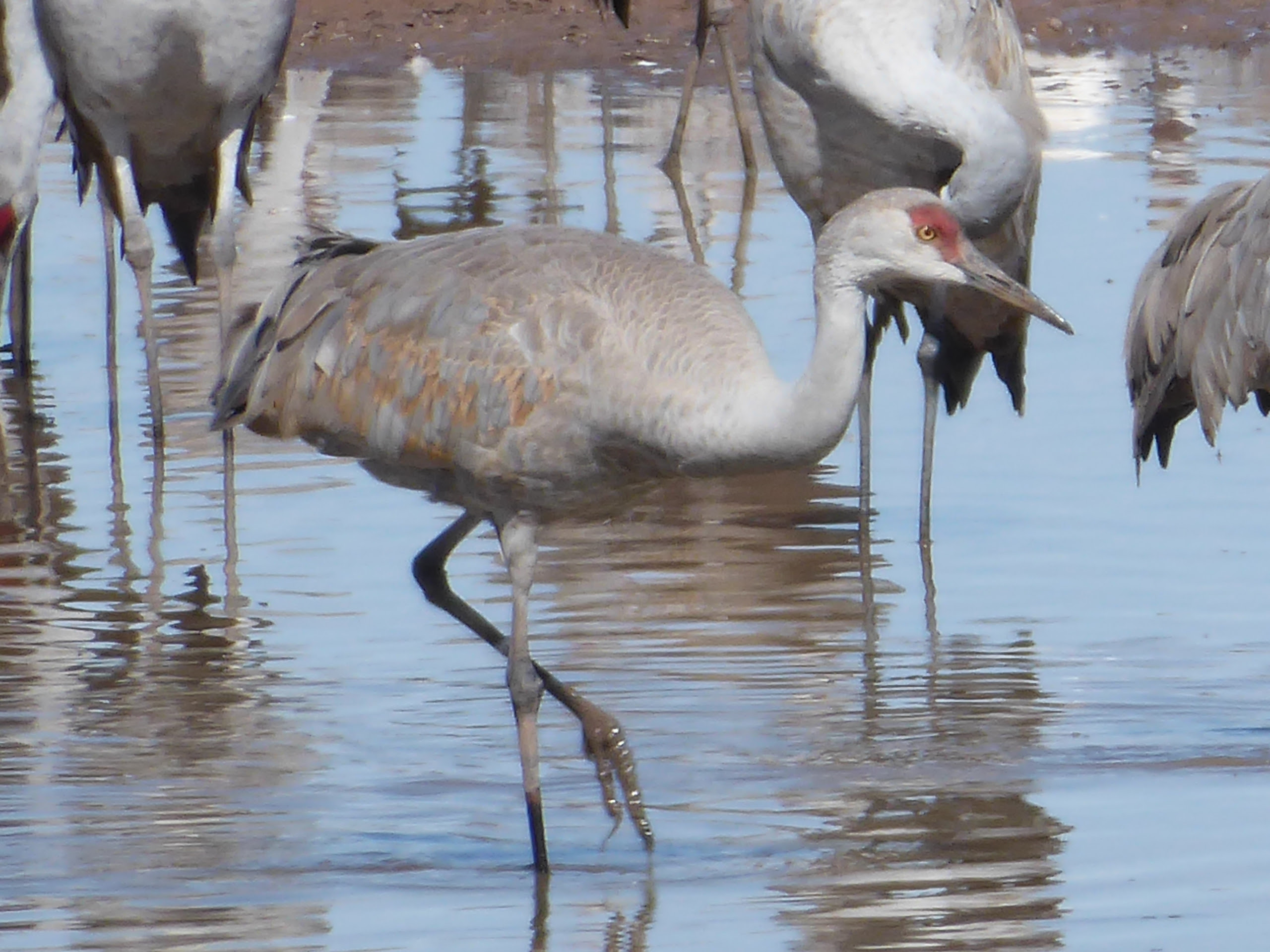 The Sandhill cranes will stay at Whitewater Draw until early to mid-April, resting and feeding in preparation for their next migration

Each year, an estimated 2 billion migratory birds are killed across North America by building collisions.  During the 15 minutes it will take you to read this article, an estimated 36,000 birds will die from such a collision.  These types of fatalities are second only to the impacts of habitat destruction such as urban development, agriculture, forestry, climate change, and invasive species.

Collision with glass is the single biggest known killer of birds in the United States.  Unlike natural hazards that predominantly kill weaker individuals, collisions kill all categories of birds, including some of the strongest, healthiest birds that would otherwise survive to produce offspring.

Viewed from outside, transparent glass on buildings is often highly reflective (sky, clouds, water, vegetation) and birds try to fly to the reflected habitat or through the perceived passageway to food or water sources seen through the glass.  Mirrored glass is reflective at all times, day and night.  Tinted glass reduces collisions, but only slightly.

Windows can be made more bird safe or bird friendly.  Decals or lines/patterns in glass covering as little as 5% of the total glass surface can deter 90% of strikes.  Birds generally will not attempt to fly through horizontal spaces less than 2 inches high nor through vertical spaces 4 inches wide or less. 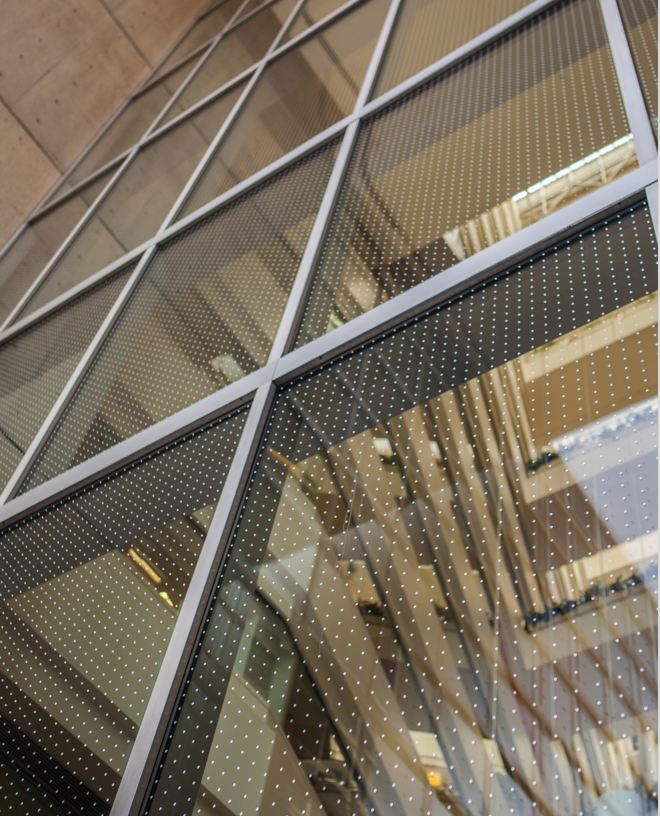 Be proactive and research more about how you can reduce or eliminate bird-window collisions at your home or business.

What is a habitat?  A habitat provides animals with food, water, shelter, and space to use to build their homes. Here are some examples:

These kids create their own imaginary animals and decide where they would find food, water, and shelter for their animals in their backyard.
https://az.pbslearningmedia.org/resource/plum14.sci.life.habitat/habitat-sweet-habitat/
•    What imaginary animals can you create?
o Draw, color, and cut out your animal.
•    What habitat will your need for your animal’s home and where can you find it outside?
o Go outside with your animal and start your hunt for its habitat.

Get Outside with Seek!
https://www.inaturalist.org/pages/seek_app
Use this App to identify the plants and animals all around you. You can earn badges for seeing different types of birds, amphibians, plants, and insects.
o Get outside and point the Seek Camera at living things. Start in your backyard or just outside your door!  You may find many different creatures in their habitat.
o Which animals, plants, and insects can you find? Hint:  If there isn’t a picture of your discovery scroll down to see if you can find it with other examples.