Riches of the Season

‘Tis the gifting season. Store aisles clog with shoppers and delivery trucks buzz from home to home like bees visiting flowers. It does feel nice to give and receive gifts. But whether you dread or look forward to the end of the holiday season, it’s comforting to remember that the Sonoran Desert effortlessly provides gifts throughout the year for observant nature fans.

To “open” these classic, perfect gifts, requires an opening of the eyes, and tuning in of the ears. The other day I hiked out to a desert wash lined with Paloverde and Ironwood trees. When I heard twittering and fluttering, I sat down on a rock and waited.  There, I received these gifts:
The sound of fluttering wings and trilling song announced a small flock of Dark-eyed Juncos, wearing inky hoods and flashing white outer tail feathers as they flitted from ground to low branches, gleaning insects.  These are snowbirds, here from northern forests, although their cousins the Grey-headed Juncos do live here year-round.

From above came a croaking, garbled voice, and a raven spiraled up and away into the blue sky. A flurry of tiny birds filtered into the dense branches of a nearby Ironwood tree. Their raspy calls and minute size indicated Black-tailed Gnatcatchers, but I couldn’t really get a good look at them. On this day I was content to know the family group was nearby, feeding and thriving.

A thrashing about in the undergrowth startled me. Then I saw it was birds, bigger birds, and again, it was the call that gave them away. Two Abert’s Towhees called back and forth in sharp single whistles as they scratched vigorously among dried grasses and fallen leaves.

I wondered at the riches presented to me this day. The sand of the wash was still damp in shaded areas and a few boulders cupped small pools. I studied footprints pressed into the sand, and supposed that a flush of insects had attracted the birds I had seen and heard. Rain from a few days prior was the precious gift that was still giving to these creatures.

Walking home along the trail I annoyed a pair of noisy Northern Flickers, who complained at my presence and bounced away through the air. A Paloverde tree held House Finches on its upraised branches, like a cluster of colorful ornaments. I could make out yellow-headed and red-headed finches among the group. On this magic day it seemed there were birds everywhere. Here a small flock of White-crowned Sparrows foraged among the branches of a Creosote. A bit further along the trail a Northern Mockingbird stared out boldly from a Paloverde. I couldn’t believe my good fortune, or the richness of these gifts. 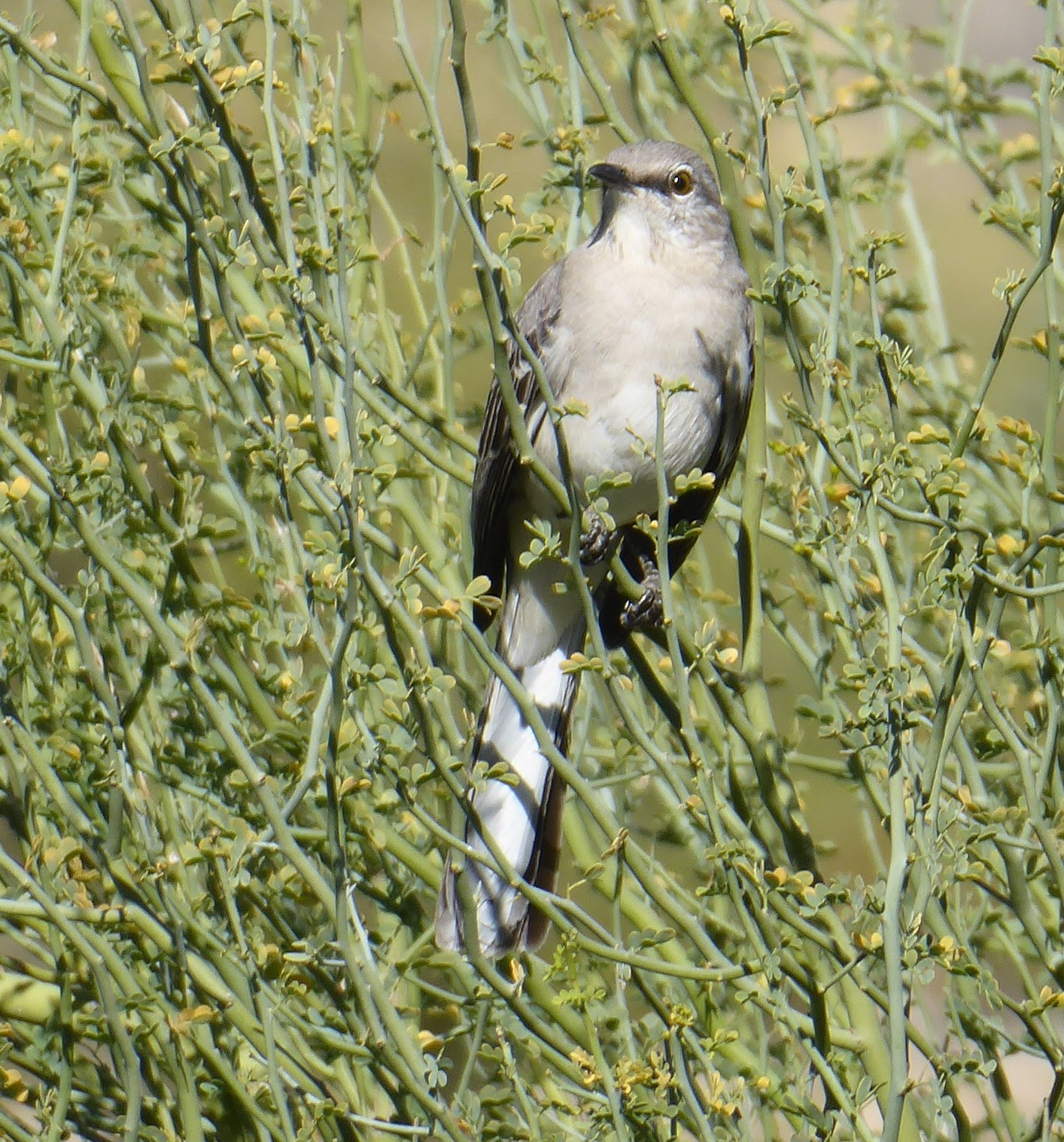 Most days when I walk the desert trails, I see one or two common species, some days not a one.  Rain promotes life in the desert, and with recent rain or a little luck during these winter months, we can expect to enjoy the bounty of nature’s gifts.

A Little Bird Told Me…

Our everyday language shows the influence birds have on our day-to-day conversations. Here is a sampling of the many bird idioms we use frequently:
– to make someone’s hackles rise
– crows feet
– early bird
– flew the coop
– get one’s ducks in a row
– feather one’s nest
– happy as a lark
– kill two birds with one stone
– birds of a feather
– dead as a dodo
– night owl
– chicken out
– wild goose chase
– birds-eye view
– like a duck to water
– free as a bird
– proud as a peacock
– as the crow flies
– eagle eye
– graceful as a swan
– eat like a bird
– the early bird catches the worm
– take someone under your wing
– like water off a duck’s back
– as scarce as hen’s teeth

Recognize a few? I would bet you used or heard at least one bird idiom today!!

How Do Birds Cope With Winter Temperatures?

How do birds cope with winter temperatures? It’s a simple question with very complex answers. Many species migrate immense distances, en masse, in an attempt to circumvent dropping temperatures by traveling to more mild climates until spring. Then, they’ll head back to their original homes to enjoy a comparatively gentle summer. But how do they do it?

Swainson’s hawks travel from western North America to the pampas of Argentina every winter, a journey made by hundreds of thousands of hawks traveling in gigantic flocks. This 6,000-mile journey gives them the best of both worlds – a comfortable home in the pampas from which to avoid harsh temperatures in Canada and parts of the U.S., while their spring return to North America promises temperate conditions in which to raise their young. 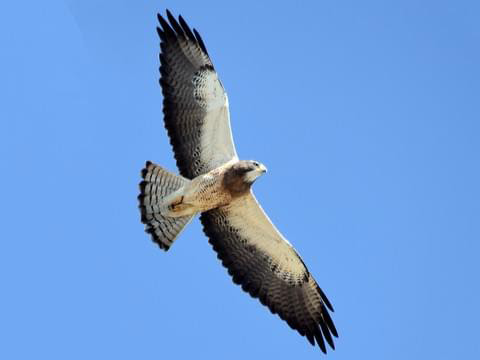 Birds that migrate as a response to changing temperatures do so with the benefit of some truly remarkable evolutionary adaptations. Migratory birds generally have larger pectoral muscles, which enable them to burn calories for energy at a more efficient rate than non-migratory species. These muscles have been shown to actually increase in size just prior to the migration, to further aid the birds in breaking down fat to energy. Additionally, migratory birds enter into a “feeding frenzy” in the weeks prior to migration, a period accompanied by a proportional increase in body mass. This gorging process allows them to build up the fat reserves necessary to fuel themselves on their long flight.

A perfect example, the Pacific golden plover, migrates from some of the coldest places on earth, like Siberia and Alaska, to spend its winters in Hawaii and on other Pacific islands. This journey, over 4,000 miles one way, is impressive by itself, but the golden plover does this without stopping, through a period of continuous flight over deep ocean that can last one hundred hours or more.

These physiological changes allow birds to undertake journeys of thousands of miles, often over open ocean, as in the case of the golden plover, where places to rest or eat are few and far between. Birds that cross oceans on their migratory path have developed responses to their basic biological needs in order to keep themselves going. The artic tern, which makes a yearly round-trip of nearly 20,000 miles – from the Arctic where it breeds, down to the Antarctic, and back – is capable of feeding while at sea, enabling it to provide for itself even on such an incredible odyssey. 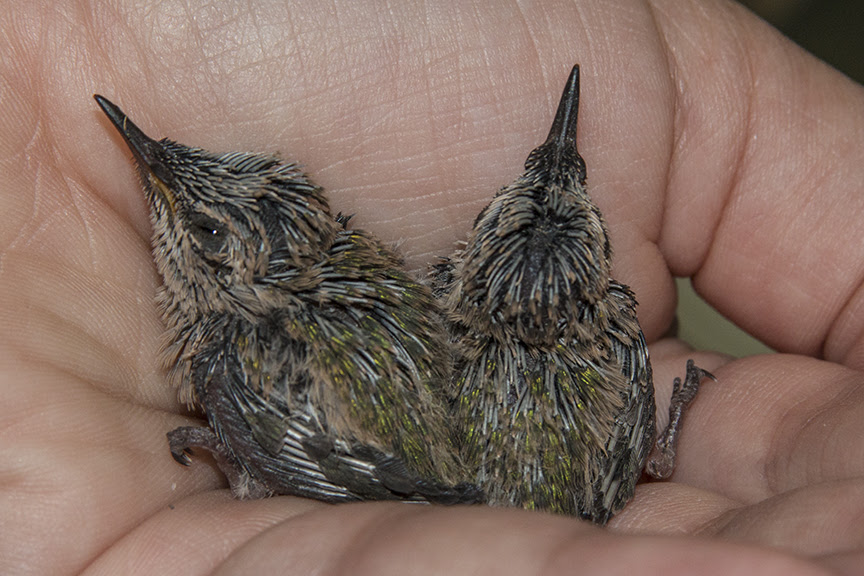 As impressive as avian migration is, one of the most unassuming birds has developed a technique that, while not necessarily a substitute for migratory flight, allows them to cope with cold temperatures that would otherwise be fatal to their wonderfully unique design. Hummingbirds possess an incredibly fast metabolism and a body temperature that normally rests at 105 degrees, and while some, like the ruby-throated hummingbird, do migrate, they are uniquely vulnerable to temperate shifts because of their internal workings. Their response is something called torpor, an occurrence where their body temperatures decrease, almost to the point of hypothermia. This is essentially a short-term occurrence of what, over longer periods, would be called hibernation. By going into torpor whenever necessary, they can survive sudden drops in temperature or moments when there isn’t enough food to keep their internal furnaces going at full speed.

What is the one idea that Kid Stuff has covered the most in 2021?

Is it how to make a bird feeder? Nooooo!
Is it about what animals are found in the desert or the importance of water? Nope!
How about learning how to recycle stuff? Nice, but no!
All good answers but the most important idea has been getting outside every day!
Why?
Because when kids get outside, they connect better with nature, wildlife, and it helps them grow lean and strong!

Here are more outside activities that are fun to share with friends and family:

This book has 50 outdoor activities. Check it out!
A guide to exploring the great outdoors for kids ages 6 to 12.
Encourage young nature lovers to get outside and track, explore, discover, and create.