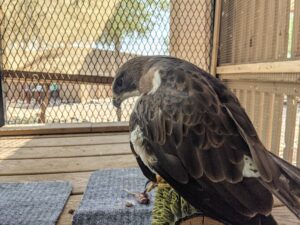 Beau was found as a nestling near Wilcox, AZ. In 1996, his owner brought him to the Wings Over Wilcox Festival and gave him to Liberty Wildlife personnel. In addition to being imprinted, Beau had been fed an improper diet for some time and had quite severe folding fractures. Because of these conditions, he was judged to be non-releasable and became a popular addition to the education team known for his gregarious personality and talkative nature. Beau is now retired from education programs because of arthritis he developed in his legs and feet. He continues to enjoy greeting the public and being a part of Liberty’s education activities on the Liberty campus.