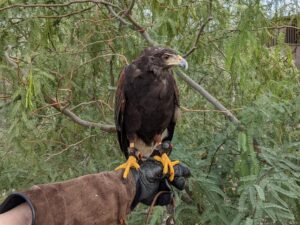 Hunny was found at one of APS’s Phoenix substations as a juvenile and brought to Liberty.  She had been electrocuted and suffered severe burns and the loss of considerable tissue near her wing ligament. As the wounds healed, this ligament shrank, not allowing Hunny to have full extension of her wing. Unable to fly, she was transferred to the Education team and is a remarkable survivor of her injuries.