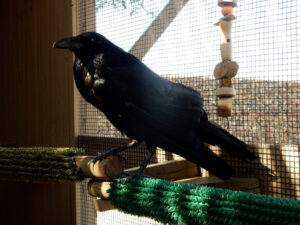 Tikani was found on the ground and brought to Liberty as a nestling. He had an injury to his left wing in the humerus and radius ulna (bones that form the elbow of the wing) that resulted in the wing being twisted 180 degrees. Radiographs of the wing showed that surgery was not an option. The injury left Tikani with limited flight ability, suggesting that it would be difficult for him to survive in the wild.