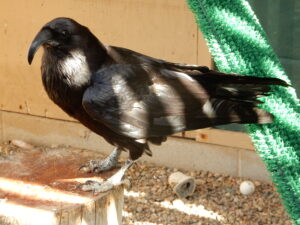 Beaker was found in Wickenberg, Arizona, with indications that electrical shock had damaged his lower beak. Although he learned to eat with that damaged beak, Liberty personnel feared that he would have trouble competing for food in the wild.  He joined the education group.